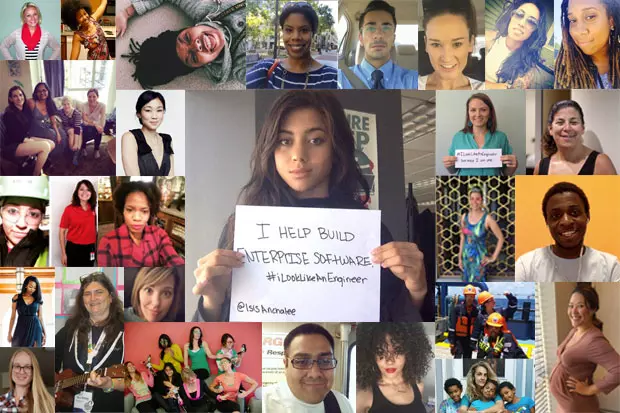 Selfies and hashtags have transformed how we follow trends and receive news on the internet. The beauty of these hashtags is that they provide an additional vessel to shed light on the stories they share on social media. One software engineer did just that with a selfie and a hashtag to break down stereotypes of what an engineer looks like. We investigated what made participants so drawn to share their personal-professional stories online in the popular #ILookLikeAnEngineer identity hashtag movement and what future hashtag crafters can do to have a similar impact .

What are identity hashtag movements?

Identity hashtag movements such as #ProfessionalLocs, #BlackLivesMatter, and #YesToAllWomen have united marginalized groups to reclaim their truth and dismantle stereotypes that may be tied to the group. Posting on social media with these hashtags, amplified with a selfie, has the potential to give a face to the social issues experienced by these marginalized groups. In a way, these movements amplify voices of those who have gone unheard. To understand who participates, why they do, and their perceived impact, we conducted a qualitative study of the #ILookLikeAnEngineer identity hashtag movement.

What did we do?We identified both what influenced participation in the movement and what the perceived impact according to participants and non-participants. Based on these findings we determine recommendations for future identity hashtag movements.

First we interviewed Isis Anchalee, the founder of the #ILookLikeAnEngineer hashtag, to discuss her inspiration behind the hashtag. We then conducted remote semi-structured interviews with 32 participants and observers of the hashtag from around the world. We asked them about their engagements and perceptions of the movement.

What did we find?

We found cross cutting themes that defined how people decided to participate including: (1) identifying with the movement as a “true form of an engineer” or marginalized group, (2) recognizing public image consequences associated with sharing your personal and professional identity, and (3) determining the audience seeing the post and how it may affect their relationship moving forward.

The other aspect we found is how the movement impacted participants, observers, and the engineering community as a whole. Interviewees reported that they felt empowered by the movement and felt like it raised awareness by maintaining the ongoing conversation about inclusion. Yet, many participants still felt that the same people who heard about the movement are the ones who were already interested; not the ones who actually need to see the movement. In an attempt to connect people who were unaware of the movement, participants coordinated offline activities to engage their local community through meetups and company-wide discussions.

We know it is too late to give guidelines for previous hashtags that came and went, however, it is not too late for the upcoming ones. If there are other who are interested in a successful (relatively measured through participation and impact) movement we have a couple recommendations in the table below.

The formal research paper, Selfies as Social Movements: Influences on Participation and Perceived Impact on Stereotypes by Fannie Liu, Denae Ford, Laura Dabbish, and Chris Parnin was recently published at CSCW ‘18, 21st ACM Conference on Computer-Supported Cooperative Work and Social Computing. This year’s conference will be held in Jersey City, New Jersey from November 3-7th, 2018.The paper is now online at the digital library and locally.

Question? Comments? Email us or find me on Twitter @DenaeFordRobin! Don’t forget to use the hashtag #ILookLikeAnEngineer.